I returned to messing around with the Raspberry Pi over the last couple of days and finally got around to publishing the Citrus Perl distribution for Raspberry and the start of a distribution wrapping various Raspberry GPIO libraries and hardware.

Citrus & Raspberry Pi
Posted by Wallasey at 8:39 AM No comments:

Edited 14 November 2012 to add use of qcow2 images and add kernel I compiled.

Following my initial post about wxPerl and Raspberry Pi, I thought I had better retrace the steps I took to create my environment and post a howto. So, read on only if that interest you.

This is to get Rasbian, the debian based distro for Rasberry Pi working under Qemu on Windows, and then to install a custom Perl and wxPerl. I should point out that as far as can recall this is my first serious venture into using Qemu so it is very much a beginner's approach.

First you need Qemu for Windows. I downloaded the latest pre-built binary zip Qemu-1.2.0-windows.zip from  http://lassauge.free.fr/qemu/ .

For convenience I just put everything into a single folder - C:\RaspberryPi. So you need to extract the contents of Qemu-1.2.0-windows.zip to C:\RaspberryPi so that you have, amongst other things, C:\RaspberryPi\qemu-system-armw.exe.

Next you need a suitable qemu kernel. I used the instructions at http://xecdesign.com/compiling-a-kernel/ to help in compiling my own kernel that can be downloaded at qemu-arm-kernel.zip. I did not follow the instructions quite to the letter - I extracted a config from a working qemu / Raspberry kernel to use as a starting point.

Extract the contents of qemu-arm-kernel.zip (both kernel file and 'modules' sub-folder ) to your C:\RaspberryPi folder.

Time for a bit of explanation of the steps that follow. The 2012-10-28-wheezy-raspbian.img file is a 2GB raw disk image that is intended to be written to an SD card or other device - and then have the root partition resized to fit the SD card. The image provides a fully working environment - there just isn't much free space if you don't resize it.

To resize our image, we are going to create a copy then rather cheekily we are going to load the first image under Qemu to give us simple tools to resize the copied image. The copied image is the one we will use to play with. There is probably a more efficient way to do this with some other ported tools and there are certainly easier ways working in a Linux environment. But the following way just uses the things you need anyway to run a Raspbian image under Qemu.

Open a Command Prompt. In the command prompt we'll make our copy of the Raspbian image in the qcow2 format. We'll use the qcow2 format because the file size on disk will only increase as we use sectors. A 32GB raw format image would use 32GB on our hard disk even if 30GB are empty.

Next we'll resize the new image. I've chosen to add 32GB to it, but the choice is yours.

Now we are ready to launch the original raspbian image and use it to expand the filesystem on the second.

You can probably figure out what the params are doing, but 'versatilepb' is the board that Qemu will emulate and works OK for the Raspbian images,  arm1176 is the type of CPU in a Raspberry Pi and '-m 256' tells Qemu the amount of RAM to allocate. There is no point specifying a higher number for RAM even if a Rasberry Pi board can support 512mb. The number 256 is the maximum that the Versatile board can support (and Qemu emulates ).   The two raspbian images specified as -hda and -hdb will appear as devices /dev/sda and /dev/sdb to the versatilepb emulation. The OS will be loaded from /dev/sda2 and we can then go about resizing the /dev/sdb2 partition on our expanded myraspbian.qcow2.

Having issued the qemu-system-armw command above, you should get the Raspberry Pi startup menu which is intended for first time use on a real Raspberry Pi. There is nothing we can usefully do on here for our purposes so you can just select 'finish' that should get you to a command prompt. At this stage, reboot to complete Raspbian's initial setup:

After reboot, you should end up at a login prompt. The default user / password combination for the raspbian images is

Use this to login. We'll use the GNOME Partition Editor to fix up our new image so we need to install it.

The GNOME Partition Editor is listed under 'Other' in the application menu. By default the GUI will load details for /dev/sda. We want to alter /dev/sdb (which is our myraspbian.qcow2 ) so change to that using the dropdown at the top right of the GUI. Select /dev/sdb2 and selecting 'Partition' from the menu, you can select 'Resize/Move' to resize /dev/sdb2. You can just drag the bars in the GUI to resize to fit the free space on the 15GB image. Apply your changes ( your selections are just 'queued' to begin with) and when this is complete you can close  the Editor. Log out of the LXDE graphical environment and shutdown the machine.

When shutdown is complete you can close the Qemu Window.

Now we are ready to boot our new resized raspbian image.

At first startup you will get some error messages ( which result because of the resize we just did ) and be dumped to a rescue prompt. You can fix the filesystem, as suggested by the error messages, with

and reboot the system

When the system has rebooted, you will be presented with the Raspbian startup menu. This time you may wish to make some selections for your keyboard and locale. After you exit the setup you will be logged in as user 'pi'.

The first thing to do is setup your X configuration so that you get the maximum resolution supported in the Qemu emulation. This appears to be 800x600. (A real Raspberry Pi board supports much higher resolutions). You will need to add an xorg.conf file to your configuration. I've provided one that works for me for a simple install

After reboot you will have to login as user pi with password raspberry.

Now you are ready to build wxPerl.  I never use the system Perl for development as your stuff and the system stuff will always fall into conflict so the first thing to do is to build a Perl. Building from source on a Qemu emulated ARM environment takes a very very long time. To save you the effort if you wish, I have uploaded a complete tarball of the Perl and wxPerl that I built that you can install.

I installed my Perl to /var/local/xperl and for the download simply gzipped a tar of the xperl directory for distribution.

But first thing is first. You will need a development environment whether you use the download tar.gz or build yourself. The default gcc in Debian Wheezy is 4.6.3 but this has a bug on the ARM architecture that causes the compilation of Perl to fail. You need to install a gcc-4.7 based environment.

To install a pre-built Perl and wxPerl

While the rest of this post is concerned with running Raspbian under Qemu, you could also install the above Perl / wxPerl to Raspbian on a real Raspberry Pi.

Open an LXTerminal, prepend  the custom Perl to your path, and run the Wx::Demo

If you really want to build Perl 5.16.2 and Wx yourself then my configure for Perl was:

I added some basic CPAN modules

Then I needed the development libraries required to build  wxWidgets.

I'm not sure if it matters, but I wanted wxWidgets built with the same gcc as Perl uses so I downloaded the Alien::wxWidgets tarball and built with

Requested a download and build of wxWidgets 2.9.4 when prompted.

Then it was back to the cpan client in a graphical environment  for the Wx builds.

Open an LXTerminal and

I hope it all helps anyone interested to get started.
Posted by Wallasey at 4:11 PM 4 comments: 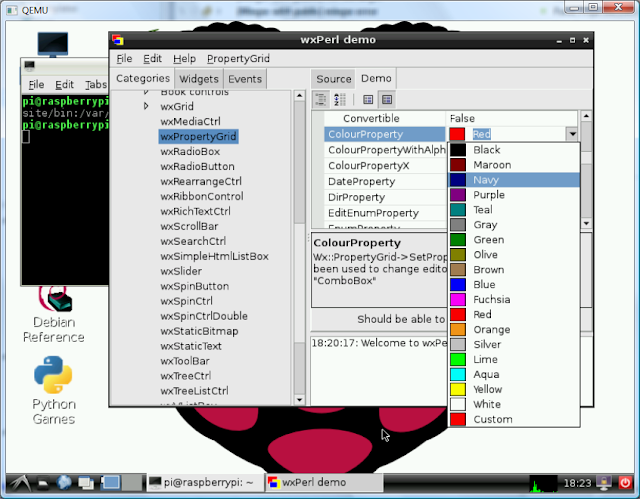 PPMs for latest Wx rolling out.

After a gap approaching 11 months the wxPerl site for Wx related PPMs is being refreshed with the latest versions of Wx and supporting modules.

If you have not taken a look at Wx for a while it may be worth a return visit. In particular the availability of an up to date Wx::PdfDocument  is an interesting useful addition with extensive example code included for Wx::Demo.

Current users might also like to try modules built against the latest release of wxWidgets 2.9.4 by pointing the PPM client at the development repository.

PPMs for MS Windows 64 and 32 bit are currently available. Linux and Mac OSX builds will be uploaded soon.

Whilst working on the port of C++ example code for Wx::PdfDocument I came across a simple cross-platform way to launch documents from Wx applications.

The necessary functions and methods have been supported in Wx for some time but I have not come across usage in wxPerl.

It's simple, it works and it's one of my favourite snippets.

Citrus Perl 5.16.1 has been released bringing the latest Perl and Wx together in a binary distribution. On Windows, Linux and Mac OSX  downloads including Wx built against both wxWidgets 2.8.12 and 2.9.4 are available.

A schoolboy error not completing the pre-release testing for the latest Citrus Perl resulted in me inflicting broken Windows releases on a few folks.

Release 14a fixes the problems.

Probably...
Posted by Wallasey at 4:24 AM No comments: